TABLOIDS AND CHILL. OR WHY PRINCE HARRY SHOULD DOWNLOAD CALM. AND STOP LISTENING TO ELTON JOHN

Newspaper Executive and Media Investor Steve Sampson on the Royal Rift with the Press, revelations of the rich and famous and where that leaves our best-selling newspapers

I bet you Harry has been listening to Elton John. He famously took The Sun for £1M when it meant something. The paper alleged that the singer had been cavorting with a variety of young men – a story that seems fantastically passé 30 years on.

Mick Jagger told Elton to reverse away from it like an Italian tank. He didn’t know the paper was keen to pay. It has been wrong – more importantly the campaign was costing readers. Sun readers loved Elton, didn’t mind if he was a flamboyant homosexual. In fact, they rather liked it.

Newspapers used to lose readers for two reasons. You offended them or they died. Today it’s Apple Wot Won It. Apple news is on every kid’s iPhone for free. They don’t buy papers, they don’t even read them if they’re lying around.

People don’t want to see their heroes destroyed. I’m not sure they ever really did. Editors expect a huge backlash now on social. Recent examples have made the news – in every sense.

The Sun and Ben Stokes. Britain’s biggest tabloid recalls a horror family shoot-out from before Ben was even born. True story but caused massive upset to hero Ben and outcry amongst fans and the general public. Kiss goodbye to any co-operation from the England Cricket Team.
My Verdict: Out for a rosy. Unless Stokes was prepared to tell the story himself as part of a series or a buy-up, running it when he was the hero of the summer was bound to spark a backlash. Maybe OK a generation ago when the paper splashed on its top cricket columnist Ian Botham, a West Indies tour and a broken bed. And still expected his piece for tomorrow’s sports pages. But not today. This man is an icon. Make him your friend. Now he is an implacable enemy. 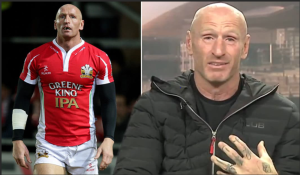 The Sunday Mirror and Gareth Thomas. Britain’s first gay rugby star and now leading gay rights campaigner reveals he has HIV in The Sunday Mirror. More than that, he was blackmailed into the revelation. But not by the Sunday Mirror. He chose the softer focus Sunday tabloid because he knew and trusted their staff and Editor. A genuine exclusive which led the agenda for more than just publication day. Wily coyote – Editor Peter Willis – knows the power of celebrity clout in a positive story.
My Verdict: Spot on, big story, nothing wrong with a sympathetic treatment on P1. All-round win.

The Mail On Sunday and Prince Harry. Oo-err. This is going to end in a tear tsunami. Harry has carpet-bombed the UK Press with writs and legals for all manner of crimes – imagined and real – going back 15 years. The present-day Mail on Sunday has incurred his wrath for running a letter from Meghan to her dad. Breach of copyright, data protection, downright theft. You tabloid b*stards. You name it.

The MoS Editor – relatively new and the former number 2 at The Daily Mail – has come out swinging. This is a fight to the death. If it ever gets that far. Two huge beachmaster elephant seals slugging it out for supremacy over a piece of sand. It will end up with both of them bloodied and battered. Especially Duchess Meghan, the ultimate loser.

Harry is poorly advised. Maybe he won’t take advice. Except from Elton when picking up the keys to the jet. Whose new book makes liberal mention of Harry’s mum.

This isn’t just about those slimy Fleet Street hacks and their low tactics. This is about how two young Princes who deserved the love and understanding of the country, who seem to have lost their path. Topless pool in Vegas – makes us love you even more Harry. Bollocking a SKY reporter on the latest tour for asking a reasonable question (you even know her name) makes you look more than a trifle tightly wrapped, sir. And rude.

But the Press can be right and still lose the battle for readers, hearts and minds. We can go on battering Harry and Meghan. Who wins that one. I have no doubt they are already planning to emigrate, immerse themselves in Hollywood and charity. Kiss goodbye the UK and our Press. Markle -v- Markle. Chewed up, spat out. What a shame. Hmm.

My verdict: Genuine sadness. If I were still doing it, I would make a special case for those two Princes. That’s not going soft. The Mail on Sunday will defend their actions all day long. This is not a gross act of tabloid invasion. But is that right in the court of public opinion. The readership.

My Summary: There are a lot less reasons to buy a newspaper. It’s a pastime for old people. The broadsheets are making headway through subscription. The Times with 300K+ subs. The Guardian is profitable after decades of red ink. They also have 2.1M followers on Instagram. They speak to their readers. The Sun lost £90M+ last year. They have 265K followers on IG. A tenth of a paper we used to laugh at. Not now. None of them will ever – repeat never – be the commercial force, attract a new young readership. Certainly not to dead trees. Mailonline is huge, reviled, a fantastic piece of work, William will be king before it makes a return.

The world has never been able to communicate so easily. We seem to be even further apart. A Minster loses his job for touching a woman’s knee. A Prime Minister allegedly squeezes a woman’s thigh 20 years ago and it’s a story. A President… (take in PA).

There are days you read the Daily Mail/Mail on Sunday and marvel at the quality of journalism, the investment. Post the Leveson inquiry they were the standard bearers. Who else will hold power to account if not newspapers like those.

Harry’s legal confetti will go nowhere. Bigger issue for our popular Press is where do they.

Steve Sampson journalist is former Assistant, Northern and Scottish Editor of The Sun newspaper, a Director of Trinity Mirror publications including the Daily Record and Sunday Mail and Business Insider. He was a launch presenter of Radio5 Live, founder of First Press Publishing and contributes to the BBC. He is an investor/owner across a series of digital initiatives, and a media adviser

Steve Sampson has held senior positions in media principally with Mirror Group and Murdoch newspapers. He also founded First Press Publishing which was acquired by Trinity Mirror in 2000 where he served as a Director on various TM companies. He heads up a portfolio of digital assets in online and mobile with connections in the UK and US which include a global launch this year. He was one of two founder Vice Chairmen of Ryder Cup Captain Colin Montgomerie's cancer charity at the inception but now takes no active part.
View all posts by Steve Sampson →
This entry was posted in Media. Bookmark the permalink.